May 15th, 2016
Congratulations to Hurricane High School for being State Runner-up class AAA for 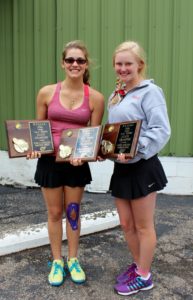 2016! We are especially proud of Paige Phillips who won the state championship at third singles and second doubles!!
Paige also was Gamer of the Week from Teays Physical Therapy!
Rebecca Osborne also won the state championship at number four singles!
Congratulations to all the players that made the High School Tournament:  Rebecca Osborne, Paige Phillips, Emily Moore (9th Grader), Sydney Miller, and Mike Phillips!
Congratulations girls for a JOB WELL DONE!

May 9th, 2016
Evie Bastin, a 7th grader, was runner-up for Charleston Catholic Middle School for Number One Singles for the Kanawha County Championships!

See What Our Members are Saying!

Our daughter has played tennis for several years and our son has just recently started playing competitively. We have been around many teaching pros and Bob is the best! That is why we started driving 2 ½ hours round trip 3 or 4 times a week a couple of years ago in order for our kids to hit with Bob and to be a part of his clinics. Bob has a genuine interest in his students and not only teaches tennis but also sportsmanship, life skills and life lessons. That is why he has a great and close-kn… END_OF_DOCUMENT_TOKEN_TO_BE_REPLACED

Best Tennis Coach in the world! Bob has been teaching my son for 2 years and he is becoming a star! Thanks Bob!

My daughter started Lessons at TVTC with absolutely NO prior tennis experience.  After one clinic, my daughter loved the sport.  She has progressed over the last 3 years and still looks forward to every clinic and lesson. She absolutely loves the weeks of summer tennis camps and the difference in her performance and progression after each week of camp is always amazing to me. My son is now playing (age 8) and the progression in his game after 3 months of Future Stars tennis clinic is unmatche… END_OF_DOCUMENT_TOKEN_TO_BE_REPLACED

Six and a half years ago my three kids walked into the doors at Teays Valley Tennis Center.  They ranged in age 3-6 with zero experience.  As of today all three are still playing.  They certainly have learned the sport of tennis and so much more.  My kids have been taught discipline, respect, and sportsmanship.  Bob is a coach, mentor, and part of our FAMILY!

I love the indoor tennis courts and the observation deck! Allows me to comfortably and easily watch my grandson!